Jim Sparks wakes up at 4 a.m. every day and makes the commute to Bozeman from his home in Livingston to start his route as a Streamline Bus driver by 6:44 a.m.

Jim Sparks wakes up at 4 a.m. every day and makes the commute to Bozeman from his home in Livingston to start his route as a Streamline Bus driver by 6:44 a.m.

“My life has been early rising with all my jobs,” said the 71-year-old retired truck driver.

Between 6:44 a.m. and shortly after 1 p.m. each weekday, Sparks drives a redline bus. Each shift, he drives the route seven times, roughly 68 miles per day. 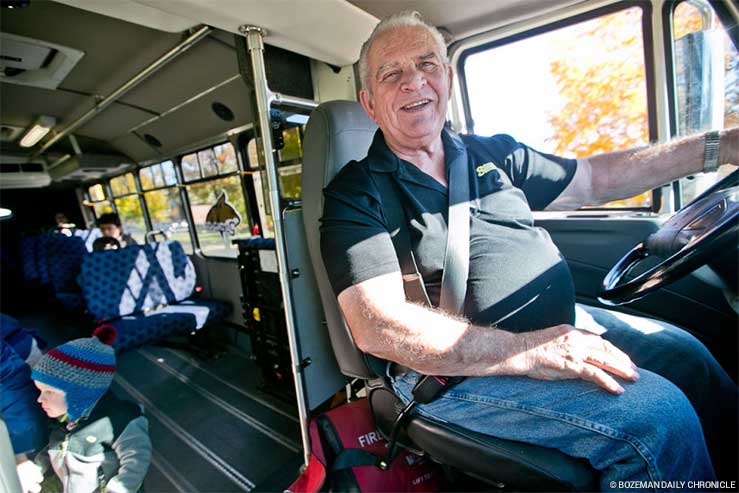 Sparks, who has lived in Livingston for more than 25 years, started with Streamline in 2007. During his tenure, Sparks has driven most routes in Bozeman, as well as trips between Gardiner and Mammoth and from Bozeman to Bridger Bowl.

“I enjoy the people,” Sparks said of his riders. “You always encounter something different just about every day.”

“I’ve been real fortunate. The Lord has blessed me,” Sparks said. 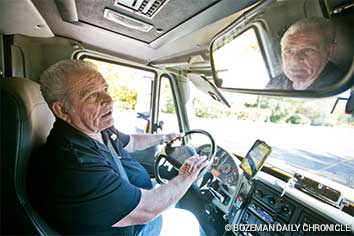 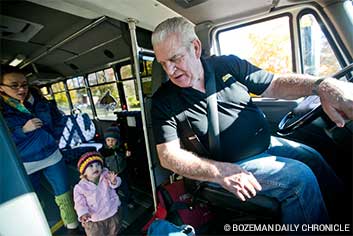 Sparks’ route is a laid-back route, averaging 35 to 40 people a shift – mainly college students, he said.

While parked in front of the Student Union Building at Montana State University last week, physics professor John Carlsten popped his head in to say hello.

“He’s one of my best riders,” Sparks said with a grin.

“They’ve got the most wonderful drivers in the world,” Carlsten said before bidding Sparks adieu.

Sparks mentioned several times how much he likes his job. He said he will continue driving a bus in Bozeman until he isn’t physically able to.

“When you enjoy the people you work for, it’s easy to come to work,” Sparks said.

WOW! We were overwhelmed by support at the County Commission hearing this Tuesday! It was so great to see so many members of the community take time out of their day and speak before the commission in support of the Urban Transportation District! We’re very excited to announce that the Urban Transportation District is officially on the May 2nd special elections ballot, a mail-in only ballot!Pictured Below is Linda, who we can’t thank enough for sharing such a touching story about how Streamline benefits her son, as well as many other disabled members of our community. Offering an independent lifestyle to members of our community is something we’re proud to be a part of! Below is an excerpt of Linda's testimony.A huge thanks to everyone who spoke! We’re so very lucky to have such an active community. "I have a 32 year old son with developmental disabilities [...]The formation of a proposed urban transportation district will give my family peace of mind, knowing that Streamline will always be there for him and he will continue to be a mobile, productive, tax-paying member of the community." ... See MoreSee Less